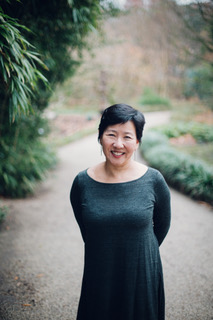 Karen Kao is an author whose debut novel, The Dancing Girl and the Turtle, will be released on April 1. Before she began writing, Karen practiced law for 22 years, first in the United States and later the Netherlands. Her last job title was Partner and Head of Corporate for Kennedy Van der Laan, a major law firm in Amsterdam. Karen was an expert in cross-border mergers and acquisitions. She speaks with us today about daring to make career moves across borders and disciplines.

You’ve made some major career switches. Tell us where it all started?

My original career choice was to become a poet. I was still in college at the time and thought I had it all worked out. I would learn how to cut hair. Then I would travel to Europe, live on the beach and write poetry. Simple!

My father disagreed. Law seemed like a much more stable career. He had me apply to law school. To my surprise, Georgetown University Law Center accepted me. At the time, it was one of the top 10 law schools in the country. How could I turn it down?

But I hated law school. I had to learn how to analyze text so that I could use the words as weapons. It killed my love of reading for a long time. Luckily, the practice of law is entirely different. As a young telecom attorney in Washington, DC, most of my work involved getting permits or exemptions from the government. From now on, my career path would entail a lot of time talking to engineers on the phone.

My first M&A transaction involved a company that was being stripped and sold off for spare parts. You know, like in the movie Pretty Woman? I was there with a group of other grunts doing due diligence. It was not a happy place to be, where the employees glared at us, blaming us for the fact that today might be the end of their career.

How did you end up in Amsterdam?

The short answer is: I fell in love with a Dutchman. By then, four years into my career as a DC lawyer, I could already predict our future life. Where we would live. What school our kids would attend. Who our friends would be and what we would do together. It scared the willies out of me. I don’t like life to be predictable. So a move to Amsterdam made perfect sense to me, career or no career.

Though I hadn’t given up on working altogether. So I made the effort to learn Dutch. And eventually I returned to the law, though it wasn’t easy. For one thing, a US law degree is not recognized in the EU. And my experience was in the US regulatory arena, nothing directly applicable to the Dutch legal scene. So I had to reinvent myself.

I got incredibly lucky. A local law firm hired me to draft their model Share Purchase Agreement. It was a 6 month gig as professional support staff that turned into a 9 year culminating in a senior associate position. Career #2!

To make that happen, I needed to parlay a skill I had learned in DC into something marketable in the Netherlands. And when I hit the limits of what I could achieve on the basis of US law experience, I went back to school and got my Dutch law degree. That degree and the official admission to the Dutch Bar then made it possible for me to move to any job I wanted.

It sounds like a smooth career transition. No bumps in the road?

Plenty! I had to learn a whole new legal system that was similar but not identical to the one I knew. And then there was the challenge of the language. My secretary checked everything I wrote before it went out the door, but it wasn’t the grammar I was worried about. I was afraid of misspeaking, like saying murder when I meant malpractice.

There were cultural minefields as well. Like the time I showed up at a client’s office wearing a miniskirt. No one had told me about the Veluwe, a region in Holland known for its strict Dutch Reform traditions, including a dress code for women that involved long skirts and high necklines. Oops.

Are women treated differently in Holland than in the US?

I was usually the only woman in the room in the Netherlands. That’s one huge difference. Female labor market participation in the Netherlands is relatively low across the board. So the pool of women that trickles up to the top is also relatively small. I can count on the fingers of one hand the times when my opposing lead counsel was female.

Both countries have glass ceilings and double standards, but I don’t feel like I suffered from either. Or maybe I just wasn’t aware of it. I came of age in a US law firm, remember, where it’s sink or swim. There’s no room for self-doubt. So it never occurred to me to wonder whether I was qualified for promotion. Of course I was!

That said, there is a lot of sexism out there. It’s more hidden in the US, at least it was before the age of Trump. In Holland, the sexism seems more unconscious. A man once explained to me that women are handicapped because they can bear children; that’s why they need to be helped. A pretty debilitating mindset if you let it get to you. But there’s no reason why you should.

Case in point. I’m about to walk into a room to meet a client for the first time. I know it’s a Dutch trade association. The guy who introduced us is coming to the meeting, too. I open the door and there, before me, sit as many as a dozen men. The chairman looks up and asks my guy, why didn’t you tell me you were bringing a woman? So what do I say in response to this clearly sexist remark? I ask the chairman: if you had known, would you have worn a different tie?

It sounds like you were enjoying yourself. Why did you end of leaving the law behind?

I did enjoy practicing law and do not regret having followed my father’s advice. My problem was boredom. After a while, one deal looks pretty much the same as the next. Even the people were pretty interchangeable as soon as I could figure out how to work the room. You see, in order to be a good dealmaker, you have to be able to read people. And, once you can do that, you can play them as well.

I was becoming manipulative, even mean. I needed to get out of that role. Unfortunately, at a law firm, there aren’t many options for a career change. You can be a fee earner or a fee burner. I didn’t want to become the latter.

So I started looking around at what my options were. But I discovered that I was living in a very small bubble, populated only by other professionals like me. I decided to quit cold turkey and then start looking.

Did you decide then to write?

Oh no! I was actually thinking about finance. I’m fairly good at numbers and was always attracted to the strategic side of M&A. I knew that would entail re-schooling and a significant step down in terms of income and status. But I had started over before and I thought I could do it again. I talked to all sorts of people and even tagged along with some of them for the day.

Meanwhile, I had begun to write, casually and privately without any view toward publication. The idea for my novel had come to me by then. The more time I spent on it, the more time I needed. I decided to write full-time. Career #3.

If you had it to do all over again, would you have skipped the law?

Absolutely not. I had a great time practicing law and, for a short period of time, being a Very Important Person. Strangely enough, skills I learned as a lawyer are equally useful to a writer. For example, lawyers worry about worst-case scenarios and devise back-up plans for all eventualities. Turns out that creating a plot for a novel uses the same skill. Just as a lawyer’s ability to read people at the negotiating table allows a writer to design credible characters.

Most importantly, I gained self-confidence. I’ve already been successful at two careers. I can afford to take risks on my third!

You really need to believe in yourself in order to be a writer. Believe that you eventually will write something worth reading. And believe that there is someone else out there who will someday agree to publish it.

Tell us about your book! Does it have anything to do with the law?

Oh, good grief, no! That would be too boring. The Dancing Girl and the Turtle is about Shanghai in 1937.

Soldiers rape Song Anyi and left her for dead. Her family wants to hide the rape by marrying her off but Anyi wants independence. She wins, by turning to self-harm and prostitution. Meanwhile, the Japanese prepare to invade Shanghai.

There’s a sneak preview of the novel in London as well as the official launch in Amsterdam. If any of you Femflection readers would like to attend, you’re more than welcome!

Here are the links:

For more information on Karen Kao and her novel, The Dancing Girl and the Turtle, see www.inkstonepress.com